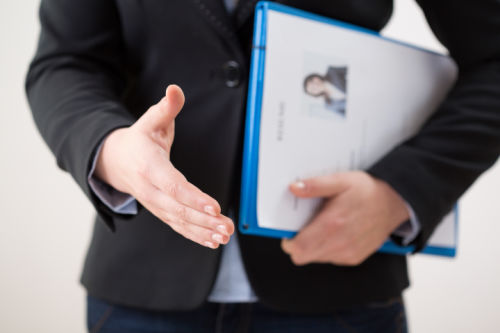 Since you don’t have a lot of business experience, you may not be aware that often, especially for an entry-level position, the initial interview will be conducted by a third-party instead of the hiring authority. The interviewer who does not have hiring authority is usually going to screen out far more candidates than he or she screens in. This person is going to look for more reasons why a candidate should not be considered, rather than the reasons why the candidate should be considered. These people don’t want to look bad to the hiring authority.

These interviewing authorities or screeners will not know the real nitty-gritty, gives and takes, that the hiring authority might tolerate in hiring someone. They’re going to pass along to the hiring authority the safest candidates they can find. Your job is to shine in front of them and communicate that you are not a risk at all.

You want to be sure that you answer all of their questions and close them for the next interview. If the interviewing authority tells you that you’re going to be promoted to the next interview, you need to be sure that you get this person’s support for future interviews with in the company. The way you do that is to simply ask, perhaps like this: “Mr./Ms. _______, I really want this job and am convinced that I’m the best candidate you could hire. I would like to ask you to help me as much as you can through the interviewing process.”

Even if you have to suggest meeting a second time before you go on to the subsequent interview, you want them to “load your shotgun” so that you can perform well in the rest of the interview process. You want to ask this person about the backgrounds of everybody you will encounter, what their positions are, how long they’ve been with the organization, what their role might be in the interviewing process, and so forth.

Being new to business and, especially, to interviewing, you will grossly overestimate the influence of these interviewing authorities on your candidacy. You may think that their promotion of you to the next interview means you have a very good chance of getting hired. Wrong! You have to make it past these interviewers, but 99% of the time they have very little influence on who is hired. They are only gatekeepers.