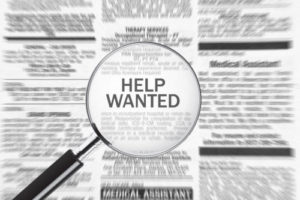 If you have worked at all during your high school or college years, either full or part time, or if you’ve been in the military, you have had some exposure to “working” for a boss. If so, you will probably immediately understand this Tip. If you have not had a boss, this Tip may shock you. Trust me – if you accept what I share with you here, the job search process will be much easier to understand.

The employers you interview with have no more emotional and psychological people skills than does the average shift manger at a fast food restaurant. A Harvard MBA doesn’t teach a person much about hiring and managing people. Don’t expect that because you have a new degree everyone else will suddenly become more intelligent, or have common sense. People won’t be more courteous, prompt, reliable, or responsive. In short, they won’t make good business decisions, or make them quickly. Did you know:

Thus, the vast majority of the businesses in this country operate like small businesses. Brian Tracy, one of the most popular business consultants in the country, describes most of the businesses as “greedy, selfish, lazy, impatient, vain, and ignorant.” They are just like the managers running them.

Don’t expect that high intelligence or business acumen are a given in business managers. These managers will interview you and promise that you’ll hear from them soon … and you’ll never hear from them again. They will tell you that you are an excellent candidate and then you’ll find out that they hired someone else. They will interview you three or four times – even tell you that they would like to hire you – but it doesn’t happen.

Most candidates, especially those without a lot of business experience, don’t realize all of the peripheral issues that go into a hiring a candidate. You might be surprised to learn that 30 percent of the times when a company claims that they need to hire somebody … they don’t. They change their minds for a myriad of reasons, but the result is the same – no one is hired.

Here are some things you need to remember:

While I don’t want to discourage you by suggesting that you will not be treated well in the interview process, the truth is grim. You’re going to be lied to, led astray, and unfairly encouraged, discouraged, ignored, and/or made to feel insignificant in about every possible way.

However, keep in mind that: